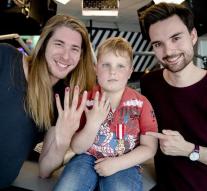 hapert - Thousands of people left a message on condoleance.nl for Tijn Kolsteren, the six-year-old boy who died of cerebral cancer on Friday morning. Around 14:00, over 14,500 people wrote a condolences. They wish the survivors strength and call Tijn a hero and a canyon.

Tijn became known for his nail polish action during Serious Request, which collected money for African children with pneumonia. The action continued after Serious Request until Friday and brought over 1.1 million euros. The money goes to the Semmy Foundation, who wants to buy a device to treat children with cerebral cancer.

'Tijn, who saved the lives of so many pediatric pediatricians, eventually suffered from pneumonia,' reports the director of elementary school, which Tijn sat on, on the website. Tijn was still in school last Wednesday. He would have been seven in seven weeks.

Also leave a condolence for Tijn? Then click here.