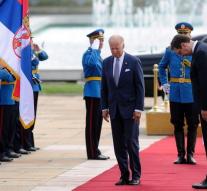 belgrade - The first senior US official has Vice President Joe Biden expressed sympathy with Serbs who have lost as a result of the NATO bombing in 1999, family or friends, he did Tuesday when he was in Belgrade to encourage Serbia and Kosovo to normalize relations.

NATO conducted bombing in 1999 to halt Serb attacks on ethnic Albanians in Kosovo. The intervention led to the departure of Serb security forces and later, in 2008, the declaration of independence by Kosovo.


Serbia does not recognize Kosovo's independence, but does have pressure from the European Union concluded a number of agreements to try to regulate the relations. Analysts and Western diplomats agreements by both parties are carried out only slowly and with great reluctance.