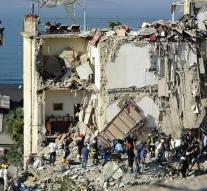 naples - Close to the Italian city of Naples is a four-storey building collapsed. According to SkyNews Italia, seven people are missing, including two children.

The building dates back to the 1960s and is located on a railway in Torre Annunziata (province of Naples) and was renovated. Strikingly, when two freight trains crossed over, two of the four floors collapsed.