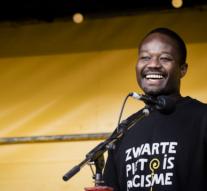 the hague - A protester against Black Piet has to pay a compensation of 500 euros to an agent who held him in protest in 2014. The court in The Hague condemned the activist, known Amsterdammer Jerry Afriyie, on a conditional fine of 500 euros on Tuesday.

The court had previously released Afriyie. The court still condemned the activist because he had physically opposed his detention without worrying about the physical consequences for the agent who held him.

Afriyie and other protesters were arrested during the national invasion of Saint Vincent in 2014 in Gouda. He stood with other activists in a place where that was not permitted.