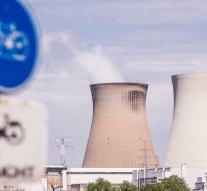 The defects came to light during inspections by operator Engie Electrabel, reports the nuclear watchdog FANC. It states that there are no risks for the population, the employees and the environment.

For both Tihange 2 and Doel 4 reactors, it is now being examined how the recovery should be carried out. They can not be restarted until the relevant buildings meet the requirements. The repairs in Tihange 3 are in progress. Which are completed in Doel 3.

There are many concerns in the neighboring countries about the safety of the power plants at Liege and Antwerp. They count a total of seven reactors.