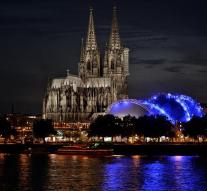 berlin - At the world-famous Cologne Cathedral, concrete barriers were placed by the German police. The measure to protect the gothic cathedral comes after the reports that Islamic militants wanted to destroy the Sagrada Familia in Barcelona, ​​another icon of church architecture.

'We took this decision as soon as possible after the recent attacks in Spain,' said a police spokesman. 'It is our job to protect sensitive points and the cathedral is a symbol of Cologne, known all over the world. ''

Spanish media reported that the terrorist cell that commenced attacks in Barcelona and Cambrils initially planned a larger attack on the art nouveau monument of architect Antoni Gaudi, the Sagrada Familia.