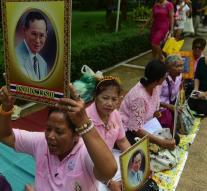 bangkok - Thai crown prince on Wednesday canceled an appointment at a university. His father, the 88-year-old King Bhumibol, is seriously ill and it is feared that he will die soon. The Thai stock market fell earlier in the day though considerably.

Even Prime Prayut Chan-o-cha canceled a planned visit to Chonburi province, so that he can remain in the capital Bangkok. The king is with kidney problems and pneumonia in the hospital.