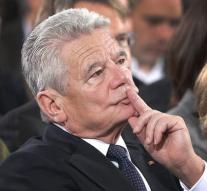 - German President Joachim Gauck is worried about the presidential elections Tuesday in the United States. In an interview published Sunday in the journal Der Spiegel let Gauck know that especially the unpredictability ' '' Trump troubled him.

Gauck said that it is unclear what to expect the world of Donald Trump, the Republican could be elected president. ' I consider, along with many people in the US and with us, as a problem, '' said Gauck. ' But first, let's wait and see what decides the American voter. ''