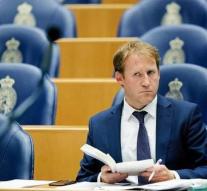 - A number of parties in Parliament has reservations about the 'hackwet' that the police and judiciary in the future may hacking devices to investigate serious crimes. D66 MP Kees Verhoeven warned Tuesday particular that the police can use the manufacturer unknown vulnerabilities in software, to enter.

The problem is that according to Verhoeven back doors need not be always be reported immediately, so that it meshes remain available during the investigation. That makes the Internet, according to him only less safe.

Not only the police, but also cyber criminals and foreign intelligence services may include use those vulnerabilities in devices like computers and smartphones.

Secretary Klaas Dijkhoff (Security and Justice) does not agree with that criticism. He points out that the weaknesses in the software now just exist, or the police do or not use them. According to him, moreover, it is always preferable to report as soon as possible vulnerabilities so they can be repaired.

Yet even the MPs Sharon Gesthuizen (SP), Liesbeth van Tongeren (GroenLinks) and Lilian PVV Bright still critical. Government Party VVD and CDA, worry less, and underline the importance of the law (officially called Computer Crime III), as the police and judiciary are too few opportunities for the digital detective work.