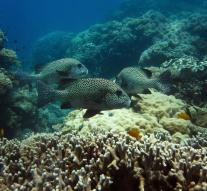 - Tourism Organizations in Australia are concerned about the growing number of fatal incidents around the Great Barrier Reef, the famous coral reef in the Coral Sea, northeast of Australia. Tuesday was a 75-year-old Japanese killed in snorkeling in the area. She was the fourth elderly within a month thereby lost his life.

Over the full year came in 2016 for ten people at the snorkeling. That is twice as much as other years.

It mainly concerns older people who had health problems. According to the organization for tourism, it is time to take action and to adjust the rules for snorkeling. Thought for example, to special instructions for older people which highlighted the risks.