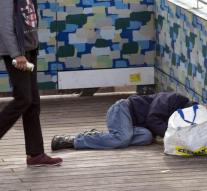 amsterdam - A mobile messaging service specifically for homeless people is also active from Thursday in Utrecht and will follow Noord-Brabant and Limburg. Through the service get homeless people on their cell phone information such as the opening of the winter shelter. They also received encouraging messages for additional heartened.

A year ago the service in Amsterdam was set up by the Salvation Army, Vodafone and the Protestant Parish Amsterdam. 'During the trial in Amsterdam we noticed that the participants could increasingly find their way on the streets. The messages they amassed information and power to get their lives back on track, 'said manager Luc Tanja.

Service (Street Messenger) focuses on people who have recently become homeless for example a divorce, redundancy or bad investment. This group is particularly vulnerable because they are not yet streetwise and have to work hard to regain housing and jobs.

The next step are homeless in major cities such as Rotterdam, The Hague and Groningen turn. The ultimate goal of the initiators is to let all the homeless by mobile phone to communicate with organizations that can help them.