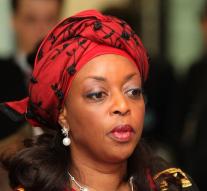 According to Nigerian media, a luxury apartment complex, which the then minister bought in 2013. The judge ordered millions of suspected rental income to temporarily freeze. The authorities are already suspicious of money laundering by Alison-Madueke.

Alison-Madueke, who has disappeared, is not only in sight with the Nigerian authorities. The US Department of Justice is trying to extract property from two businessmen who would have paid bribes to the former government woman. In return, they could allegedly conclude lucrative deals with a subsidiary of the state oil company.

Alison-Madueke was Minister of Oil from 2010 to 2015. They previously denied being guilty of corruption.