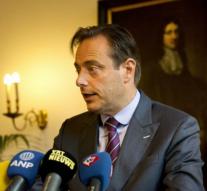 antwerp - The Antwerp prosecutor's office has dismissed the complaint by a Moroccan human rights group against the mayor of Antwerp. The complaint was about statements by Bart de Wever on the link between radicalization and the Berber Community. Weaver is also president of the New Flemish Alliance (N-VA).

Last year, lawyer Abderrahim Lahlali filed in the name of a Moroccan human rights group filed a complaint against Weaver. He had said in the VRT program Terzake that '80 percent of the Moroccan community in Antwerp consists of Berbers. This is a closed group with a lot of distrust of the government, a weak organized Islam, a group that is highly susceptible to Salafism. '

Racist, human rights group ruled. The Antwerp public prosecutor, however, dismissed the complaint because 'no crime' was committed. That happened in August last year, but because the prosecutor never communicated about it, everybody went- even Bart de Wever- until now assume that the complaint was still being investigated, according to the newspaper Gazet van Antwerpen and De Standaard.