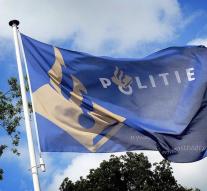 - People who believe that the police checks them unfairly because of their appearance, announce that from Wednesday the app from the police. Which is extended profile with a complaint form the so-called ethnic.

this, the police hope to gain more insight into how much citizens feel ethnically profiled and whether it is justified. The subject was recently put back on the political agenda. Dutch celebrities like rapper Typhoon and goalkeeper Kenneth Vermeer Feyenoord felt disadvantaged because agents they had put aside because of their skin color and their expensive cars. Typhoon was openly apologize to the police.

According to Peter Slort, the police in charge of the subject of diversity, does this function in the app of course with all the attention to harassment and ethnic profiling. ' The police carries out dozens of checks daily. Ethnic profiling occurs, like the police wrongly accused of ethnic profiling. Through this app we get there better view, which we targeted to improve our craftsmanship. ''

The police is also working on a technical possibility to automatically runners in tracking a license plate information on previous audits of that vehicle. This system is still under development. Next spring is thus a test run.

The police leadership has already indicated that it is not right that people be put solely on the basis of their appearance along the side.