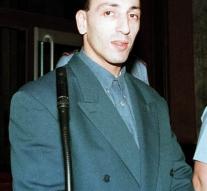 strasbourg - Belgium needs a now former 'difficult' inmate pay a hefty compensation. The European Court of Human Rights in Strasbourg certain Tuesday that the man, Farid Bamouhammad has received a degrading treatment in prison. Belgium is ordered to pay 42,000 euros in damages and expenses.

Bamouhammad, better known by the nickname Farid Le Fou (the Madman), was stuck for murder, attempted murder and hostage-taking. He was transferred dozens of times from jail to jail because he was unmanageable. He was in April conditionally and provisionally released because of medical reasons.

Bamouhammad was once before gone to a judge because of his treatment in prison. In 2014, he received compensation of 11 000 euro because he wrongly eleven days, shackled hand and foot remained in isolation.