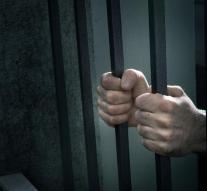 - A Chinese woman gets a compensation of the equivalent of 233,000 euros because it has been thirteen years wrongfully in prison. Qian Renfeng was, according to state news agency Xinhua forced to confess that she had poisoned children.

The woman worked for her conviction in a kindergarten where a child died of food poisoning. Two other children were sick. Qian known pressure she had rat poison mixed with the meals of children. A court found her guilty of murder in 2002.

When the authorities again looked into the matter, found that there was little evidence against the woman. The judge then decided to grant in December Qian rehabilitation and release. The woman had demanded a compensation of nearly 1.3 million, but was Tuesday awarded a much lower amount.