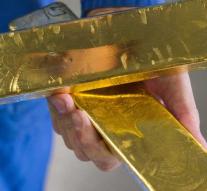 seoul - A South Korean company thinks it has found the wreck of a Russian battleship that sank 113 years ago. According to South Korean media, the naval vessel may have billions of gold on board.

The ship Dmitrii Donskoi sank in 1905 during a sea battle with Japanese ships. The company Shinil Group has been trying to localize the wreck for years and now thinks it has bite. Researchers found the probable remains of the ship at the island of Ulleungdo, at a depth of 434 meters.