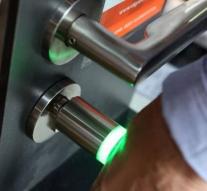 - The company Three Square Market, located in the state of Wisconsin, provides staff with microchips. With the small chips, employees can open doors, log into computers and even buy food. So far, fifty employees (out of 85) have already signed up for the chip.

The RFID chip, in the size of a rice grain, costs almost 260 euros. According to Patrick McMullan of Three Square Market, they are moving forward to the future. 'We think the market will be guided by people who are first in this trend,' he explains to the BBC.

The chips for the employees are not equipped with gps so the company can not see where its people are. The insertion of the chip goes with a two-second dot.

Removing the chip feels like removing a splinter. Eventually, the chip should be able to replace the wallet.