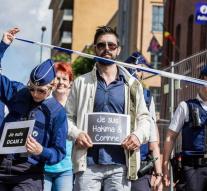 - More than 250 agents on Tuesday morning met at the Charleroi police station to show support for their two colleagues who were seriously wounded Saturday by an attack with machete. The policemen from Charleroi area observed a minute's silence in the Walloon city observed.

,, We are not targets 'could be read among other signs they were carrying. Monday was a police delegation from Brussels already given honor to the victims. King Philip comes later in the day to visit.

An Algerian undocumented hacked with a machete in the two policewomen, when a third officer shot and killed the 33-year-old man. Terror Group IS has claimed responsibility for the attack.


The Belgian authorities have taken additional security measures after the incident, but according to the police unions insufficient. Interior Minister Jan Jambon consults here on Tuesday with the federal and local police.