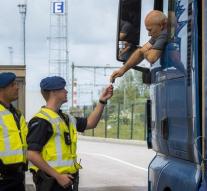 brussels - The five European countries that have permission to check temporarily sharing their borders are there in principle on November 12 stop. The European Commission wants the freedom to travel than is restored within the Schengen zone, but it is not excluded that Member States, the checks required any longer.

Austria, Germany, Denmark, Sweden and Norway were in May green light for targeted and limited border controls after the commission had established that the Greek border and asylum system was not functioning properly. The countries caught many of the migrants from Greece doorgereisde.

Given the sharply diminished flow of migrants, Brussels sees no reason to modify the proposed date of November 12th. Plays that the European Border and Coast Guard officially starts from 6th October. This will provide for better monitoring of Europe's external borders.

The commission claimed Wednesday that the Greece is making progress with its asylum system, but that there is still much to do before EU countries asylum seekers who have traveled from Greece may return again, as the Dublin Regulation prescribes. If the Greeks have their act together, that should anyway be gradual according to Brussels, given the many migrants who stay there.