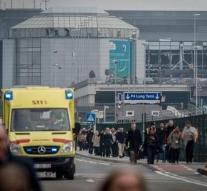 brussels - Last year's attacks in Brussels could have been prevented if the Belgian safety device had functioned properly. There are 'missed opportunities' to dismantle the terrorist network in a timely fashion. The parliamentary commission which examined the attacks of 22 March 2016 considers that in its final report.

There was too little (police) capacity and it was not used efficiently. Services did not work well and information was insufficiently shared, it is the judgment. Cooperation with other countries also left us to be desired.

The commission did not have the duty to appoint guilty but did make a series of recommendations. A thorough police reform is not included. The Brussels police are now divided into six regions.

Nearly three suicide terrorists attacked 32 people at the airport at Brussels and a subway station. There were also more than three hundred injured.