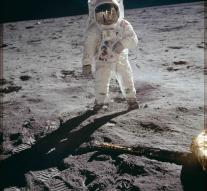 - For the first time in history, a commercial space company may fly to the moon. Moon Express wants next year his lander, the MX-1E, send to the moon.

The US aviation authorities made the approval on Wednesday after consultations including the White House and NASA. Aboard the lunar module are intended for scientific research, but also the ashes of cremated some people.

,, We can now explorers sailing into the eighth continent, in search of new knowledge and resources for the benefit of all people, '' Moon Express said Wednesday.