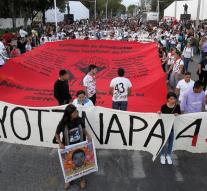 - Family members and thousands of interested people on Monday commemorated the 43 students who were murdered in September 2014 in Mexico. The demonstrators accuse the government of covering up the truth. ' We will fight this worthless government is defeated. \'Said a spokesman for the relatives.

Presumably, the students were abducted by police and transferred to a criminal organization. Its members later said to have killed the students and burned their bodies.

In October 2014 a mass grave was discovered and the young people were officially declared dead in January 2015. However, there has so far been identified only one body.