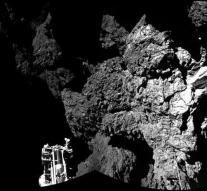 darmstadt - Communication faltered from the start, but as of Wednesday the European lander on comet 67P will be silent forever.

The scout, Philae, to send his messages to the Rosetta satellite orbiting the comet. The probe would send the information to Earth. Now that the power is on. Therefore, the systems will be turned off in Rosetta. If the Philae unexpectedly still send messages, so do not come to earth. Early this year, all flight controllers decided not to send more jobs.


The Philae landed on the comet on November 12, 2014. That was a unique achievement, but the landing was not quite right. Philae landed in a different place than intended: in the shade. Hence the connection faltered and after two days the contact fell off. Since then, only briefly again been contacted.

The Rosetta continues to rotate for a few months around the comet. On September 30 it strikes the comet. The debris and the lander will then until the end of time running with the comet around the sun.