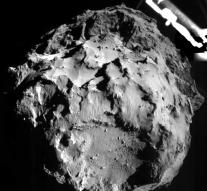 - Comet 67P / Churyumov- Gerasimenko contains oxygen molecules. Presumably, the oxygen is already included during the formation of the comet. According to research from the European Rosetta spacecraft circling around the comet, so the Dutch Research School for Astronomy (NOVA) announced Wednesday.

The research conducted by scientists from the Universities of Bern and Leiden. The results will be published Thursday in the British scientific journal Nature.

67P is emerging as an interesting object. Previously all water vapor, carbon monoxide and nitrogen, sulfur, and carbon compounds were found. The discovery of molecular oxygen as we breathe on Earth that is truly remarkable news, the scientists write. Oxygen has not yet been detected in other comets. This is partly because it reacts rapidly with ozone or water. " This is the most surprising chemical outcome of the mission to date. For decades we were looking for interstellar oxygen and now we find it just in large quantities in a comet ", said Ewine Dishoeckstraat of Leiden University.

In the cloud around 67P is ten times more oxygen than existing models predict about gas clouds in space. The measured amount was for six months fairly constant. That is, according to the researchers, an indication that the oxygen is present since the formation of the comet. The inclusion of oxygen took place billions of years ago from the gas cloud from which our solar system formed.