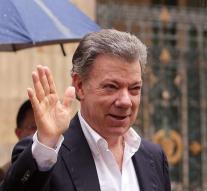 bogota - Colombian President Juan Manuel Santos on Sunday acknowledged that the people have rejected the peace agreement with FARC rebel movement in a referendum. He immediately said that the cease-fire remains in force. A slight majority of Colombians showed Sunday against the peace plan to negotiate with the government after four years was signed with the rebels.

The president will discuss Monday with all the political parties to find a solution in the peace process. The outcome of the referendum will not affect the stability of Colombia, Santos told.

The leader of the rebels, Rodrigo Londoño, had been earlier in the evening knowing that the FARC continues to pursue peace. 'The FARC maintains its willingness to use words as weapons only in building a future. The Colombian people dreaming of peace, counting on us, peace will prevail. '