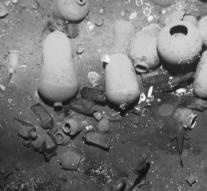 cartagena - The Colombian President Santos has decided that it was sunk three centuries ago, San José's Spanish galleon. Aboard is probably a treasure that is estimated to be between 2.5 and 15 billion euros.

The San José broke in 1708 during a naval battle with the fleet of English admirer Charles Wager. The gold, silver coins and emeralds aboard disappeared in the depths of the Caribbean Sea. One and a half years ago, scientists discovered parts of the wreck of the coast of Cartagena. However, anyone who may name the valuable cargo is controversial.

Immediately after the finding of the wreck became known, Spain reported and claimed possession of any items on board. It was in the hands of a UNESCO Convention, which states that sunk ships belong to the country of origin. However, there is one point in the Spanish cable: Colombia has never signed that UN treaty.