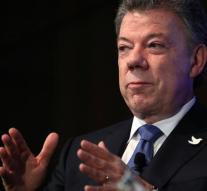 - Colombia's FARC rebels should be aware that illegally obtained funds and property to be taken in time to complete. Previously warned President Juan Manuel Santos on Wednesday in New York.

According to Santos, the guerrilla movement by collaborating with drug traffickers cash, real estate and bank accounts gathered. ' We know how to go after their money and we do not allow them launder it, '' said the Colombian president.

The proceeds from these actions should benefit victims. Santos: ' If we find their property, and we have already identified a lot, then we take it off and use the money to pay the victims compensation. ''

FARC and the Colombian government said earlier agreements on a peace agreement. That will still be submitted to a referendum Colombian voters. The rebels promised among other things to pay damages and to distance themselves from the drug trade.