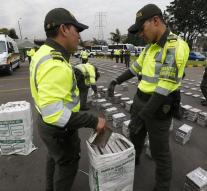 bogota - The Colombian authorities have so far this year over 300 tons of cocaine seized. Defense Minister Luis Carlos Villegas said this weekend that never had such a large quantity being cocaine was seized in a year.

According to the minister, the 300 tons of drugs on the black market worth more than 8 billion euros. Recently, the South American country achieved a great success in the fight against drug crime. Off the coast of the Nariño department, on the border with Ecuador, authorities absorbed a small submarine that carried nearly a ton of cocaine.

Colombia is the largest cocaine producer in the world. In addition to drug gangs also have guerrilla movements like the FARC fortune made with cocaine trafficking.