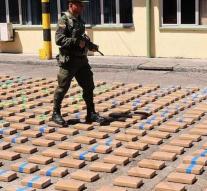 bogota - Colombia and the United States will work together to halve the production of cocaine and the cultivation of coca in the South American country over the next five years. That is what both countries agreed.

At the end of 2016, 188,000 hectares of coca plants were in Colombia and the production of cocaine reached 910 tons, according to the American drugs control service DEA. 'With this control we want to reduce the estimated cocaine production by 50 percent by 2023,' said US Deputy Foreign Minister Thomas Shannon.

'We continue to work together in the area of ​​safety and drug control. We know that by working together on one day in Colombia we can make a drug-free country ', Colombian Foreign Minister Mária Ángela Holguín said in a statement.