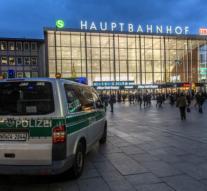 cologne - Police President of Cologne Jürgen Mathies, revelers ensures that old and new is safe in his city. 'I promise that you feel extremely safe in the vicinity of the cathedral,' said the police chief of Cologne Thursday in the Kölner Stadt-Anzeiger.

Mathies said in the local newspaper of Cologne that security of the revelers has the highest priority for the police. With the turn of 1500 police officers on the leg in Cologne. The federal police will be ready to track suspects with a helicopter.

Last year was the celebration on the square completely out of control at the Cologne Cathedral and went to the police hundreds of declarations in women who were attacked, robbed and sexually harassed.