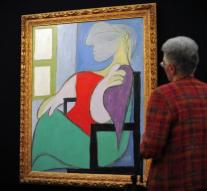 aix - An elderly French couple was Friday convicted for his illegal collection 'Picasso's nearly forty years was in the garage' on display '. The 77-year-old prime suspect Pierre Le Guennec had appealed a suspended sentence of two years. The lost art goes back to the heirs, among them Claude Picasso.

It involves working several hundred. The 'lover' took it in his pursuits as an electrician at the villa on the French Riviera, where Picasso lived with his last wife Jacqueline. He often odd jobs there in the early seventies. He himself insisted to have received the collection of the lady of the house at the time of death of the famous artist in 1973. This led to a long feud between her and her stepson Claude.

Le Guennec and his wife Danielle in particular at the time 180 paintings and other art forms as well as a book with 91 drawings. The works, to get all in good condition, surfaced some six years ago when the 'garage conservator' attempted proofs of authenticity. The prosecution estimates the total value of 60 to 100 million euros.