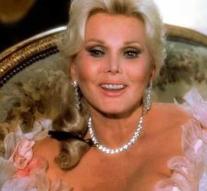 los angeles - The belongings of the late American actress Zsa Zsa Gabor are being auctioned. Nearly a thousand items, including jewelery, paintings, furniture and diva dresses, appear under the hammer in April, reports Heritage Auctions auction house in Beverly Hills.

Widower Frédéric Prinz von Anhalt wants to exhibit the collection first in the villa in Bel Air, where Gabor lived for years. Among the pieces are a generous four-poster bed from the 1960s and a saddle that the actress once received from the American former president Ronald Reagan as a present.

Gabor was born in the Hungarian capital Budapest under the name Sari Gabor, but her family immediately nicknamed her Zsa Zsa. She died in 2016 at the age of 99 from the consequences of a heart attack. The diva reportedly played in more than seventy films. More than through her acting career, she became known for her many marriages. Gabor was married with nine men in all.