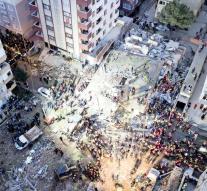 istanbul - Again, some bodies have been recovered in the collapsed flat in Istanbul. The death toll thus increased to 21. It is unlikely that there will be more victims under the rubble, but...

President Recep Tayyip Erdogan expressed his sympathy in Istanbul with the relatives of the victims. He later took a look at the location of the disaster. 'We have to learn from this', was his reaction.

The eight-storey building collapsed on Wednesday. The cause is still unknown, but Erdogan said Saturday that the top five floors have been built without planning permission. 43 people were registered at the address.