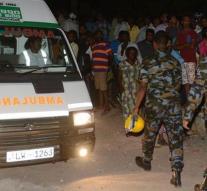 colombo - At least six people Friday were killed by debris began to slide on a garbage dump in the capital of Sri Lanka. Witnesses said that at least forty homes were buried under the rubble.

The tens of meters high mountain of garbage would have succumbed in Colombo after a fire had broken out. Rescuers dig to find in the rubble in the hope of survivors. Meanwhile, firefighters are trying to extinguish the fire. The government troops and agents to the crash site sent to help in the rescue operation.

According to medical sources least eleven people were injured. It is still unclear how many people are still trapped. Local residents already require some time that the site is moved as waste would cause health problems. The government had pledged to subsequently remove the garbage.