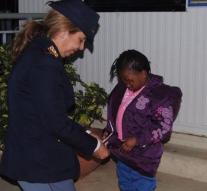 rome - An African child who early this month by sea was rescued by the Italian Coast Guard, can be reunited by a happy coincidence with her mother. The four-year Oumoh Ivory Coast had lost her mother during the long trip to Europe. She was traumatized and did not want to talk, so that the Italian authorities had no idea who she was.

A photo on the phone Marilena Cefala, head of the reception center on Lampedusa, was the solution. A few days after the unknown girl had arrived, Cefala spoke with other migrants from Ivory Coast. Because she wanted to quietly converse, she left a young girl playing with her phone. The child looked at the pictures and recognized Oumoh, whom she had met in Tunisia.

The child knew also who the 31-year-old mother of the infant. After a search revealed that she was in Tunisia. She said she had fled because they wanted to protect Oumoh for genital mutilation. The girl's father had demanded a circumcision.

If a DNA test to confirm that the woman is indeed the mother, she may come to Italy.