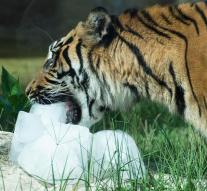 amsterdam - In ten eastern and southern European countries, the highest alert 'Code Red' came into force in relation to the heat wave that meteorologists have attributed the aptly named Lucifer.

Lucifer brings temperatures of over 40 degrees in the Balkans, Italy and Greece, which causes landslides to wreck and the risk of forest fires increased exponentially. As a result of the heat, at least two people have lost their lives and an unknown number of others have been taken to hospitals to treat them from drying out, sunbathing and overheating.

In Albania hundreds of firemen and soldiers are busy fighting dozens of forest fires. The same goes for Serbia, Bosnia, Croatia and Macedonia. Volunteers of the Red Cross go along with homeless people and elderly people with bottled drinking water. The heat is particularly threatening for people with poor health, doctors say.

In Italy, the vineyards have begun grabbing the grapes because they are shrinking under their eyes. In the Balkans, a third of the harvest on soy and corn is considered to be lost. The heat wave also leads to an additional demand for electricity for turning on the airco's. But in many countries, the net question is not calculated on such a big question.

Not only southern Europe sighed under a heat wave. The temperatures have also risen to record levels in Korea, Japan and the west of the United States.