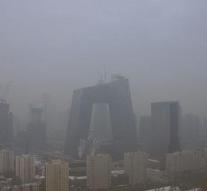 - Beijing is hit by an unusually severe air pollution. The authorities have issued code red for the next five days. It is a year since the nuisance caused by smog was so great in the Chinese capital.

An ever growing industry and the constantly expanding number of cars in Beijing are the main cause. Older cars may no longer drive through the streets of Beijing, new models may comers are the days go on the road the other day. Schools may at their discretion to close their doors. Companies employees should let go earlier.

Not only Beijing is affected by the polluted air. The nearby city of Tianjin and three northern provinces also literally groan under the burden of smog, which lies like a blanket over the landscape.