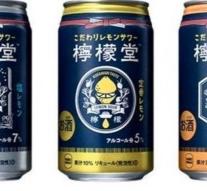 - Soft drink giant Coca-Cola has an alcoholic drink for the first time in its 125-year history. For the time being, however, the fruit flavored drink is only available in Japan.

The drink is based on the popular chu-hi in Japan, an alternative to beer. It has an alcohol percentage of between three and eight percent.

According to the CEO of Coca-Cola in Japan, this is a 'modest experiment for a specific part of the market'. 'We have not previously experimented in low-alcohol drinks, but this is an example of how we explore opportunities beyond our core areas,' said Jorge Garduno.