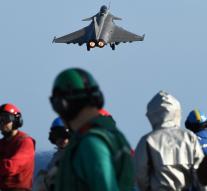 - The coalition against Islamic State last month dropped a record number of bombs in Syria and Iraq. According to data from the US Air Force, which leads the coalition.

The 3271 bombs fell on ISIS-goals in November, nearly double the 1683 in June, the ' quiet ' month of this year. In total, fighters, bombers and drones since August 2014 almost 32 000 bombs were dropped in nearly 11 000 flights. It is mainly about precision bombs.