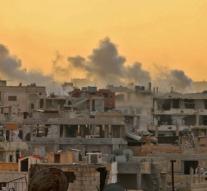 damascus - World coalition forces against IS have bombed a road and a bridge in Syria to arrest a convoy with IS warriors and their families. The vehicles were on their way to Syrian territories that were in the hands of the terrorist organization.

The Jihadists and their families left a day earlier from the Lebanese border. They were allowed to leave for a ceasefire with the Syrian army and Lebanese movement Hezbollah, who supported the regime of President Bashar al-Assad.

The coalition did not have to hold such agreements after the bombing. 'They are obviously warriors and they are on their way to another weapon,' said a spokesman.

The spokesman did not say where the bombing was done, but said that it was about eastern Syria. He did not shut up any further air attacks. 'We will meet them if we are able to do that,' he said. The condition is that a bombing can be carried out without even touching the citizens in the convoy.