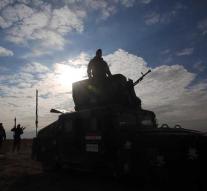 beirut - Combat devices of the US-led coalition in Syria have attacked two positions of the Syrian army in the eastern Syrian desert. This is reported by the Syrian state media and Hezbollah's military media.

'Some of our military positions between Albu Kamal and Hamimia are exposed to aggression from aircraft of the US-led coalition,' the Syrian news agency SANA said on a military basis.

According to Hezbollah, an ally of Syrian President Bashar al-Assad, the attacks took place near T2, a power plant close to the border with Iraq and some 60 kilometers west of the Euphrates River. There the coalition supports ground troops fighting IS.

The US-led international coalition has not confirmed the attack. The US military denied knowing anything about the attack. 'We have no news about a US-led attack against targets or troops of the pro-Syrian regime,' said a spokesperson for the US High Command.