Home / World / 'Coalition against IS lies about Raqqa' 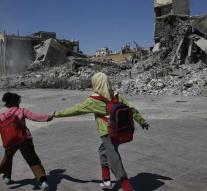 london - The US-led international coalition against the Islamic State (IS) terrorist movement has, without worrying about the residents, tore down the city of Raqqa for large parts. Human rights organization Amnesty International concludes this after research in 42 places in the ruins of the Syrian city and after conversations with survivors.

The publication comes Tuesday, just before the first anniversary of the final offensive against IS that the coalition began on June 6 last year. Raqqa was the headquarters of IS in Syria at the time and was considered the 'capital of the caliphate' that the extremist Sunnis of IS had proclaimed.

Their capital eventually fell in October last year. The enormous devastation caused by air raids and the high number of casualties among civilians, according to Amnesty, contradicts the coalition's claim that 'precision bombardments' were carried out.