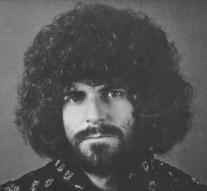 toronto - Goldy McJohn, one of the founders of the sixties pop group Steppenwolf, has died. Steppenwolf had the biggest hit with the number Born To Be Wild in 1968.

American media reported Friday that keyboardist McJohn died at the age of 72 at the consequences of and heart attack. His family made his death known via Facebook.

Steppenwolf was founded in Toronto in 1967. The band was especially successful with the first three albums. At the debut album, with the title of the title, was also the biggest hit Born to be wild.