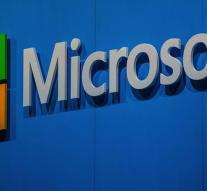 redmond (afn) - Microsoft last quarter posted a slightly higher profit and sales than a year earlier. The software company benefited thereby re-growth in the provision of software over the Internet (the cloud).

Microsoft Thursday reported revenue of $ 24.1 billion for the second quarter of its fiscal year broken. That was 1 percent higher than a year earlier. Net profit fell by 4 percent to $ 5.2 billion. The falling sales and profits, adjusted for some one-time items, had forecast higher than analysts on average.

Microsoft completed during the quarter the acquisition of the business networking site LinkedIn. In the period since the beginning of December the company contributed 228 million dollars on revenues of Microsoft, with a net loss of $ 100 million.