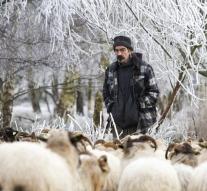 leeuwarden - Shepherd Sam Westra from Leeuwarden not get it yet an award for his sheep to maintain a nature to the city. That the municipality of Leeuwarden decided today.

Westra filed a lawsuit against the municipality. The judge then decided that the council was to review the contract. According to the court it was not clear enough how the town just came to her judgment that the procurement process was not sufficiently transparent.

According councilor Friso Douwstra specified items distributions of the candidates, but that has not had an impact on the total points were the candidates. ' The result is therefore unchanged. ''

Against the new decision of the municipality may be objected.