Home / World / Closer but still no agreement on Syria 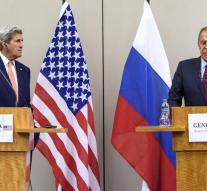 geneva - The United States and Russia are Friday failed to conclude an important agreement on a ceasefire in Syria and expanded military cooperation against terror group Islamic State. There were only a few details to be worked out before the two countries can reach an agreement.

,, We do not want a contract due to an agreement, '' said US Secretary of State John Kerry in Geneva.,, We want to get something done that is effective and works for the Syrian people, the region is stable and secure and we here to bring the table in Geneva to reach a political solution. ''

Kerry and his Russian counterpart Sergei Lavrov said Friday that their negotiating teams are going to focus in the coming days to work out some details and as yet to allow an agreement. That should give the ceasefire in February back to life and bring a solution to the serious humanitarian situation in Syria torn by civil war.


A complicating factor in the negotiations is the offensive that began rebel groups backed by the US in the southern Syrian city of Aleppo. Part of that deal with insurgent fighters of the extremist Jabhat Fatah al-Sham, formerly the Nusra Front, which is also fighting against the regime of Syrian President Bashar al-Assad.

The talks between the teams Lavrov and Kerry must now lead to a clear distinction between insurgents and jihadists and also what groups may participate in a ceasefire.