Home / World / 'Close all EU internal borders for a day' 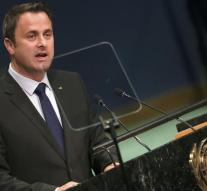 - One day the boundaries slam Europeans would do well to appreciate the value of the passport-free travel in the EU. This remarkable proposal suggested Luxembourg Prime Minister Xavier Bettel Monday at a conference in Paris.

'The boundaries a day close would show people what it means to wait two hours before they can enter Italy or Spain, as everywhere checks and any exchange is blocked,' said Bettel. 'One day. So that people could see how things are done outside Europe. It's terrible what I say, but it would be good for understanding people. '

The Luxemburger made his comments following the British decision to leave the EU. Many European leaders see it as a wake-up call and are now working to see what does and does not work in the union, thus Bettel.

In 1985, signed the treaties in Luxembourg Schengen allowing the free movement of persons in Europe.