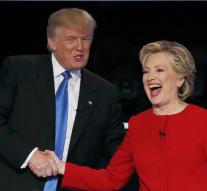 - An overwhelming majority of Americans who Monday night watched the first debate of the presidential elections favored Hillary Clinton. CNN reports based on a survey of viewers. The station signed there with that in the sample of viewers were more Democrats than in regular polls.

Clinton did better in the field of foreign policy evident in the eyes of the viewers surveyed: 62 percent liked her in that area the winner, compared to 35 percent for Trump. When the economy was the result was a lot closer to 51 percent for Clinton, 47 percent for Trump.

The poll had a margin of error of 4.5 percentage points. How many people watched remains to be seen just to the debate, but previously it was estimated that it could come out once in a hundred million people.