Home / World / Clinton: voting on myself most humble feeling 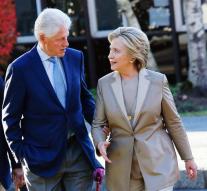 chappaqua - Hillary Clinton voted Tuesday morning in her hometown of Chappaqua. She told US media that the voice on herself 'gave the most humble feeling' that she ever experienced.

Along with her husband Bill she agreed around 8 o'clock in the morning to vote in a converted office competed primary school. There selfies were made and answered questions from the large numbers summoned press. 'I feel the responsibility to vote and feel the responsibility to vote for me,' said the Democratic candidate. Bill Clinton joked to indicate that he has had 15 years of practice as a 'political spouse' and it feels good.

Hillary Clinton left the polling station with a cheerful smile and a big thumbs up.